This is Wrigley. He’s part pug and part beagle. He’s six weeks old. And when he sees me, he runs straight for me with glee.

I’ve only met him twice before but we played and he remembers me. I’ve passed his smell test and he thinks I’m fun.

I get his full, undivided attention. As if there’s not a better human on the planet. Except maybe the next one he sees.

Puppies are 100% present. In the moment. Unworried. Life is simple and they live it wide open. It’s the puppy credo.

Play ’til you nap!

These pictures are deceptive. They are far too still. There are more than twice that many that are out of frame and blurred with puppy energy. Wrigley lives up to his name. 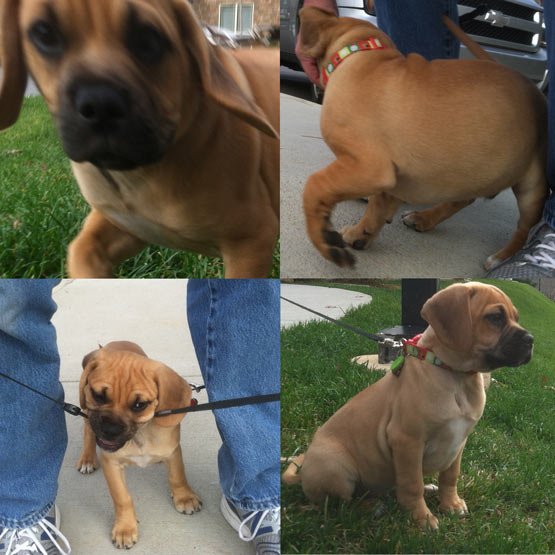 But you can imagine it. He runs, wide-eyed until he bumps into you. Then he wraps you up in his leash until he can go no further. Then, while you’re immobilized, he chews with needle-sharp puppy teeth.

You try to pet him and feel the clean, soft fur but that quickly turns into a game of pounce and wrestle. If you pick him up he will lick you with pink tongue and puppy breath.

That’s what puppies give, total acceptance. It’s like unconditional love on four paws, for anyone willing to play.

A scientist might tell you it’s pack behavior, or instinct. But science will also tell you it’s great for you. Taking your dog for a walk in nature has more proven anti-depressant power than the strongest medicines man has produced. People with dogs live longer, healthier lives. They weigh less. They are happier.

But you don’t have to own a dog. They are a big responsibility and a long term commitment. Suzie and I are in between dogs right now so we’ve learned to borrow them. The dogs generally don’t mind being loved. An afternoon at a local dog park can be quite a lift.

And if you’re lucky, there just might be a puppy.